Uranium is more plentiful than tin, cadmium, mercury, or silver, and it is about as abundant as arsenic or molybdenum.

Today, uranium is obtained from uranium ores such as [1]

Uranium can be found and is mined in the US, but it is mostly found and mined in Canada. However the most abundant source of Uranium comes from the ocean and the Earth’s crust.[2]

Uranium resources can be extracted from the ground in three ways: open pit, underground, and in-situ leach (ISL).

Open pit mining, also known as strip mining, is the removal of surficial soils and uneconomic rock to get at the ore below. Ore grades are normally less than 0.5%. This is type of mining is only possible if the uranium ore is near the surface (normally less than 400 ft). The Jackpile Mine on Laguna Pueblo was once the world's largest open pit uranium mine. 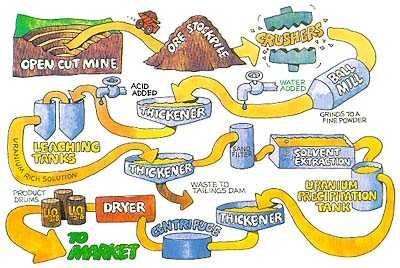 Underground mining is used to get at higher concentrations of uranium that are too deep to get at from open-pit. The ore is drilled, then blasted to create debris which is then transported to the surface, then on to a mill.

For both traditional underground and open pit mining, the rocks may have only a few percent (normally <0.3%) uranium in them. The uranium then has to be removed from the rock and concentrated. The milling process involves crushing and pulverizing the rock into very fine fragments and adding water to create a slurry. This slurry is then mixed with sulfuric acid or an alkaline solution to release the uranium from the host rock. Normally approximately 95 - 98% of the uranium can be recovered from the host rock. From this acid or alkaline solution, uranium oxide or yellowcake is precipitated. This is still not the purest form, and the uranium has to be sent to another plant to enrich it. The remaining rock slurry is pumped to a tailings dam. These tailings are exposed to the surface and heavy metals can be released into the environment.[3]

Why Do We Seek Out Uranium?[]

The nucleus of the U-235 atom comprises 92 protons and 143 neutrons (92 + 143 = 235). When the nucleus of a U-235 atom captures a moving neutron it splits in two (fissions) and releases some energy in the form of heat, also two or three additional neutrons are thrown off. If enough of these expelled neutrons cause the nuclei of other U-235 atoms to split, releasing further neutrons, a fission 'chain reaction' can be achieved. When this happens over and over again, many millions of times, a very large amount of heat is produced from a relatively small amount of uranium.[4]

The heat generated from the nuclear fission is used to turn water into high-pressure steam, which is then used in a turbine to generate electricity. The diagram below shows a very simple model of a light water nuclear reactor, one of the most common types of reactors used in the industry today. Light water refers to the type of cooling water used: light water is regular water with the normal isotope of hydrogen, and heavy water with the deuterium isotope of hydrogen.

Why Use Uranium instead of Coal?[]

World resources of coal are, in theory, large enough to produce the electricity we shall need for more than a hundred years. However, it is likely that more and more of the coal mined in the future will be converted into the more valuable liquid fuels rather than being available for electricity generation. There are also environmental and other problems associated with the increased mining and burning of coal.[8]

Any means of producing electricity involves some wastes and environmental hazard. The nuclear industry is unique in that it is the only energy-producing industry that takes full responsibility for the management and disposal of all its wastes and meets the full cost of doing so. Nuclear energy today saves the emission of about 2.6 billion tonnes of carbon dioxide each year (compared with about 10 billion tonnes per year actually emitted from fossil fuel electricity generation).[9]

Other Uses of Uranium[]

The global impact of new technologies, particularly to people groups.[]

Uranium plays a huge role in modern day's electricity. “Over 13% of the world's electricity is generated from uranium in nuclear reactors. This amounts to over 2500 billion kWh each year, as much as from all sources of electricity worldwide in 1960”.[11] The Earth has a substantial amount of uranium, so if the demands increase, then there will plenty of uranium to meet up with the needs.

World mine production is about 60,000 tonnes per year, but a lot of the market is being supplied from secondary sources such as stockpiles, including material from dismantled nuclear weapons. Uranium is a very practical use for electricity.The graph below shows that uranium is more than 11,000 times more efficient in energy conversion than crude oil.[12]

The uranium comes from some 440 nuclear reactors with a total output capacity of about 377 000 megawatts (MWe) operating in 30 countries.  Belgium, Bulgaria, Czech Republic, Finland, France, Hungary, Japan, South Korea, Slovakia, Slovenia, Sweden, Switzerland and Ukraine all get 30% or more of their electricity from nuclear reactors. The USA has over 100 reactors operating, supplying 20% of its electricity. France gets three quarters of its electricity from uranium.

Nuclear power is expected to become cost competitive against coal and natural gas in the near future and as a result a large increase in the demand for uranium is anticipated. The cost of coal and natural gas to generate electricity is expected to grow as a result of constraints placed on the market in regards to carbon emissions. As well, the demand for uranium will increase as China increases it's energy consumption.[13]

For nuclear energy to maintain its current role in electricity generation in the US and around the world, a large number of new reactors will be needed. As well, to have a noticeable effect on carbon emissions and a cleaner environment, the existing reactor fleet will have to grow dramatically.

A lack of mining investment due to over supply and low commodity prices has left the world with a resounding shortfall in uranium. The gap between supply and demand, and the resulting price increase of uranium, has now led to a resurgence of uranium exploration.[14]

Community content is available under CC-BY-SA unless otherwise noted.
Advertisement