Trend 1.7 of the Lithium Group (Group IA) Trends is that the high charge/size ratio of Lithium leads to anomalies.

LiH is more stable than other hydrides[] 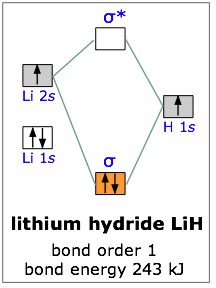 There are two occupied atomic orbitals on the lithium atom, and only one on the hydrogen. With which of the lithium orbitals does the orbital interact? The lithium 1s orbital is the lowest-energy orbital on the diagram. Because this orbital is so small and retains its electrons so tightly, it does not contribute to bonding; we need consider only the 2sorbital of lithium which combines with the 1s orbital of hydrogen to form the usual pair of sigma bonding and antibonding orbitals. Of the four electrons in lithium and hydrogen, two are retained in the lithium 1s orbital, and the two remaining ones reside in the σ orbital that constitutes the Li–H covalent bond. The resulting molecule is 243 kJ/mole more stable than the parent atoms.

Li2CO3 so much less stable than other carbonates in group 1[]

The anomalous behavior of lithium is due to the: (i) exceptionally small size of its atom and ion, and (ii) high polarizing power (i.e., charge/ radius ratio). As a result, there is increased covalent character of lithium compounds which is responsible for their solubility in organic solvents.

Li/Na form a number of hydrates salts, K some, and Rb/Cs none[]

Community content is available under CC-BY-SA unless otherwise noted.
Advertisement